The how of Howie Mandel, featured performer at the Boca Raton Concours d’Elegance

This is how Howie Mandel begins.

He’s at amateur night with some friends at a comedy club called Yuk Yuk’s in his hometown of Toronto. He’s not a performer. He’s a carpet salesman. But he’s the kind of outrageous young twentysomething you wouldn’t put anything past. The kind who’d been kicked out of high school for pranking. The kind who feeds on his considerable fears.

His buddies cajole him into getting up on stage. He doesn’t really think it through, which is kind of the way he is. He doesn’t know the first thing to do. So, he just stands up there, looking out at the room with a clueless grin on his face. Finally, he says, “What? What?” He gets a laugh. So he says it again, louder. More laughs.

By the end of his brief baptism in the spotlight, he pulls out a latex glove that he always keeps in his pocket — a germaphobe even then — slips it over his big curly hair and tugs it down below his nose. Then he blows air out through his nostrils and turns his head into an inflated face condom with five fingers. The crowd goes crazy.

A shtick is born. 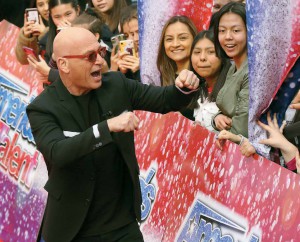 Howie Mandel greets fans as he arrives at America’s Got Talent, photographed by Willy Sanjuan of the Associated Press.

In this day when seemingly every modicum of entertainment is sliced and diced into a jillion little categories — Steampunk sci-fi or Pirate Metal sea shanties, anyone? — I ask you, seriously, where does Howie Mandel fit in?

He’s his own category: The Howie Mandel Catchall Category.

Scour the entertainment landscape down into its nooks and crannies and you will invariably come upon his oft-bespectacled domed head, a brand so glaring that a bikini wax was named in his honor. Mandel may be first and foremost a standup comic, but his quirky kaleidoscope of credits stretch all the way from the occasional Grinch of AGT to the poster boy for OCD. He is the man of a thousand phases.

And now we can add one more: headliner of the 15th-annual Boca Raton Concours d’Elegance. Mandel will appear at the Saturday night Gala of the weekend wonderland for auto enthusiasts Feb. 25-27 at The Boca Raton, formerly known as the Boca Raton Resort & Club. City & Shore magazine is a sponsor of the event.

Mandel, 66, is best-known now as a judge on NBC’s hit America’s Got Talent, but his 11-season run with that show is like the eye in the storm of a mercurial career that’s been, to say the least, distinctly peculiar. Over the course of its 40-plus years he has been — you ready for this?:

An Emmy-nominated host of one of the most successful game shows ever (Deal or No Deal);

A movie actor (co-starring as a wolf boy in Walk Like a Man);

A movie voice actor (Gizmo in the Gremlins movies);

A professional prankster (practical-joke reality shows Howie Do It and Hidden Howie, and a slew of Tonight Show hidden-camera segments).

A documentary subject (2020’s But Enough About Me);

A memoirist (Here’s the Deal: Don’t Touch Me);

A TikTok personality (dancing in his foyer for 7 million followers);

And, of course, a standup comedian (racking up as many as 300 dates a year and several TV special appearances, like New Year’s Eve’s 2021: It’s Toast! or 2019’s Howie Mandel Presents Howie Mandel at the Howie Mandel Comedy Club, his first solo special in 20 years).

The fidgety nature of these and the dozens of Mandel’s other credits add up to what you might call an ADHD IMDB, a career’s reflection of the disorder that has been with him since childhood. The condition is one of Mandel’s famous unholy trinity, along with obsessive-compulsive disorder and mysophobia, or fear of germs. That one is so famous that, long before COVID, he nearly single-handedly popularized the practice of fist-bumping — so famous that we’ve come to associate germaphobia with Mandel as much as he correlates his fears with his success.

“My coping skill is finding the funny,” he told People last summer. “If I’m not laughing, then I’m crying. And I still haven’t been that open about how dark and ugly it really gets.”

“I’m not more triggered because of the pandemic. I’m equally triggered.”

He put his comic spin on the separation that COVID caused between him and the three kids and four grandchildren he has with his wife of 42 years, Terry:

“I have grandkids who I can’t go inside and hug. So I go over there and I climb a tree and I look in the window. It’s kind of this weird zoo, where they see their Poppy outside in a tree. I don’t know if I’m helping or harming.”

Mandel is definitely helping. In 2020, the comedian teamed up with ePlay Digital Inc. to help front-line workers by launching a charity, Breakout the Masks, with a mobile-game component, Howie’s Games. In the first challenge, called Outbreak — think Candy Crush but with viruses and bacteria — players’ points translate to donations of N95 face masks, portable ventilators, gloves and other PPE to doctors, nurses and other healthcare workers.

“I have spent most of my life in fear of a disease outbreak like COVID-19,” Mandel told People as he kicked off the campaign during the pandemic’s first wave. “Let’s work, and play, together … to ensure front-line workers are safe, so that they can keep us safe.”

Yes, now to the compendium of ways that Howie Mandel has made good on his fears, we add one more. 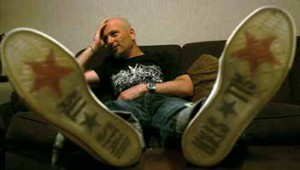 Howie’s Games are available from the Apple App Store and Google Play, and donations to the Breakout the Masks charity can be made at howiesgames.com. To purchase Boca Concours d’Elegance Gala tickets, featuring Mandel’s show, visit bocacde.com.