At home with designer Jennifer Garrigues

Jennifer “Jenny” Garrigues stands in the middle of her street waving a long palm frond so I can find her home amid the massive greenery. Her red hair is blowing in the wind, reminiscent of the signature mane of Vogue’s creative director Grace Coddington.

I have known Jenny since we met at a Red Cross Designers’ Showhouse more than 15 years ago. She was memorable there because of her effervescent personality and ability to bring color, life and distinction to her designs and her clothing.

She lives here on the north end of Palm Beach island, past the old Kennedy property and the Sailfish Club. Her place is difficult to find because the foliage is inspired more by Coconut Grove than the massive ficus bushes popular on the island.

After helping me park on the gravel drive behind her beloved royal blue Mini Cooper, we enter the cottage-like house built in 1930 by John Volk, the famous architect who designed Palm Beach mansions for the Vanderbilts, DuPonts and Pulitzers – as well as the Palm Beach Town Hall and the Bath and Tennis Club. She shares her home with Silver Birch, a Siberian Husky; and two cats, Catmando and Consuela Brunela Gabriela Garrigues. Her beloved Corgi, Reggie, is buried in the front yard.

It’s easy to understand how Jenny, a former model turned interior designer, is the best representative of how fashion and interior design intersect. Her distinctive clothing style and home décor bring to mind someone who has style in her DNA. A visitor can tell immediately that she loves to travel (she’s just back from a tour in Africa), that she loves to read (bookcases and books are everywhere) and that she adores color (no sign of beige here).

The décor is quintessentially Jenny’s – an eclectic mixture of treasures from around the world that form a design aesthetic that can be described as Boho Chic or Global. A sample of her collection includes inlaid chests from Syria, elephant tables from Vietnam, an umbrella with tassels over a lounge, both from India; a Venetian mirror and Chinese chests. The furnishings are from her world travels plus the estates of her parents, her sister and her late ex-husband.

She describes Bohemian as a mixture of textiles, tactile fabrics, unusual artifacts and furniture that people found on their world travels. The style was popular in the 19th and 20th centuries as people began traveling the globe, but it’s back again with those who want unusual design.

“This is what I love the most – the unusual but the beautiful,” she says. “A home should be filled with interest. The eye should be able to roam around a room and tell tales of where the furnishings have come from and the history behind them.”

ashion is following the same path – brightly embroidered scarves, woven ikat fabrics from India, caftans from Morocco and Spain made into dresses, shirts, smoking jackets and lounging trousers, which she says add another dimension to the “Bohemian spirit.”

Jenny, who is British and recently became an American citizen, serves me afternoon tea – salmon sandwiches, chocolate cookies with ginger and English biscuits. Earl Grey tea pours from a small elephant teapot served on a tray on a large ottoman covered in a Suzani fabric from Turkey. Only Jenny could get away with using a bright lime sofa accessorized with fuchsia and bright turquoise throw pillows. The walls are painted the same lime and accented with colorful art such as a large turquoise modern painting. A faux animal print rug rests on the original black and white tile floor.

A former model, her closet is a stylist’s dream. She has racks of clothing in a rainbow of colors. She isn’t all beige or all black in wardrobe, either. Her preferred shoe? Stubbs & Wootton. A huge custom-made cabinet with drawers contains her jewelry – broaches in one, bracelets in another. But the dernier cri is the dozens of large statement beaded necklaces hanging on the wall in the bedroom. No wonder she is a good friend of Iris Apfel, the 93-year-old style icon known for her large round glasses, necklaces and bracelets. Imagine them entering a room together.

My favorite story about Jenny’s intersection of fashion and design involves her visit to the Palm Beach residence of her friend Arnold Scaasi, a clothing designer who died last August. She was just back from a trip to Vietnam and wearing a bright orange jacket.

Scaasi asked her to remove the jacket, as he excused himself from the room. He returned moments later with pins and attached the jacket to his staircase. “That’s perfect,” he said. “That will be the color of my hallway.” Her borrowed coat color remains in the hallway today.

She became a model by chance. Her father sent her to Lucie Clayton Charm Academy, a finishing school in London that taught manners, makeup, sewing and how to get out of a car properly. The school thought she would make a good model so they sent her on go-sees. Yardley hired her as a spokesmodel to travel the world promoting their products and showing women how to use them. She also modeled for Jean Muir, Dior, Hanae Mori, Galanos and Scaasi.

It was during this time as a model that she was set up on a blind date with the charming William “Billy” Garrigues III. She refused to see him for three months, but won’t say why. He kept sending her flowers and limos and followed her on her promotional tour to six U.S. cities. Finally, she agreed to have lunch with him. They were married a year and a half later.

“Billy was a good talker and very romantic,” she says. Her career broke up their 13 year marriage. They were separated about 20 years, but Jenny says they never gave up on each other. They were still close friends when Billy died from mesothelioma in 2012 at 74.

“We had the same goals, the same love of life and the love of animals and beautiful things,” she says. “We were soul mates.”

1. Keep furnishings and pictures around that remind you of family and friends. Having them in sight brings comfort.

2. Some of my best design ideas come at night, so I pop out of bed and write them down.

3. Travel not only exposes you to other cultures, it can be a wonderful way to decorate your home with memories.

4. You can learn how to mix textures from fashion design. [Fashion designer James] Galanos used to put together tweed jackets with chiffon skirts and use semi precious stones as necklaces.

5. Beige can be calming, but it’s boring. Don’t be afraid to use color.

6. Mixed metals are not only good in necklaces, use them in a room. 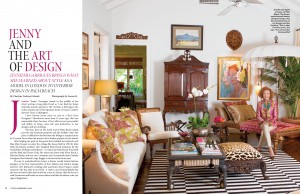 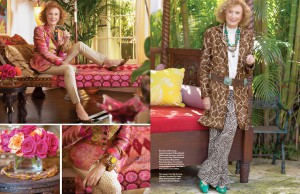 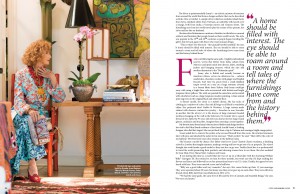 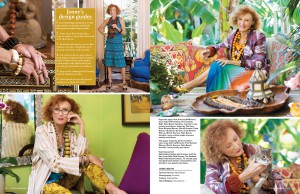