Joanna Kimball just can’t sit still.  When she’s not moving at 40 mph on the back of a polo pony, she’s busy promoting Women’s Polo around the world and designing a polo-inspired travel collection, aptly named Pangaea Citizen.

We spoke about her obsession with South Africa, New Year’s resolutions and, of course, the “Sport of Queens.”

C&S  How did you become involved in polo?

JK  Growing up in Argentina, I had always been an avid spectator.  One of the polo players I had become friendly with asked me to help him promote his polo school. I agreed on the condition that I could take classes in exchange for my help.  From the very start, I was hooked.  I felt this special connection with the horse, nature and the adrenaline you get from moving at 40 mph. I equally love the ‘after polo’ ritual of an asado (Argentine barbecue), which creates a personal bond with other players.  The integration of play with the social aspect really does make polo not just a sport, but a lifestyle.

C&S  Do you have a favorite place to play?

JK Anywhere there is a polo field! I especially enjoy Palm Beach, which my friend [polo player] Luis Escobar introduced me to.  With the US Open being here, the best players in the world are all in one place.  What makes this tournament extra special for me is Sunny Hale, the only women’s player ever to have won it.

C&S  What are you doing when you are not on the back of a horse?

JK In Argentina we have a saying that translates to ‘you have ants on your bottom,’ meaning that you can’t sit still and that’s me for sure. I’ve been speaking with the Mexican Federation of Polo to help set up a women’s tournament there, as well as developing a polo project in Sri Lanka. Traveling is a big part of my life.  I love exploring new cultures and meeting new people. After visiting  my mother, who recently moved to South Africa, I have become obsessed with that country, so I’m planning a horse safari there, in the new year.  I’ve also combined my two passions, polo and traveling, to create Pangaea Citizen, a luxury line of custom leather bags inspired by polo.

JK I actually have two. My permanent residence is in New York but I travel so much that I end up spending roughly only half of the year there, so I promised myself I would spend more time in New York, take shorter trips, with the business now I also have to stay more time in the city. The other is the one I have every year since I started playing polo, to play as much polo as possible. 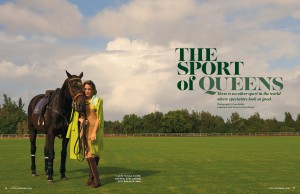 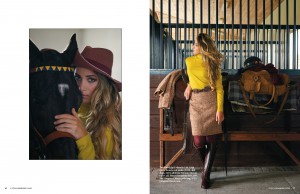 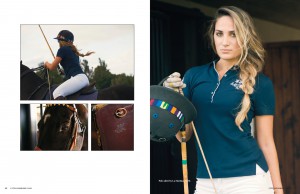