“My parents didn’t want to move to Florida, but they turned 60 and that’s the law.”

If you threw in a few well-placed yada-yadas, you might say Jerry Seinfeld’s upcoming appearances at both the Broward and Kravis centers are a homecoming of sorts. Not that he ever lived here, but in a sense, in both the real and sitcom worlds, he was one of us.

When his ’90s Seinfeld show was the biggest thing on television, when television was still television, his mother, Betty, lived in Delray Beach. Seinfeld co-creator Larry David’s parents lived in Sunrise and co-star Jason Alexander’s lived in Coconut Creek. Many episodes of the show were informed by the South Florida condo lifestyle of those parents — particularly David’s, who were the real-life model for Jerry’s TV mother and father.

The Sun Sentinel even made it into the show. The newspaper was mentioned in a 1997 episode in which Jerry’s parents reacted dramatically to an article that claimed standup comedy was a dying art.

If you’ll indulge me, I’d like to take this opportunity to issue a long-overdue correction for that article:

A fictitious story in this newspaper stating that standup comedy is a dying art was inaccurate. The Sun Sentinel fictitiously regrets the error.

My source for that correction is who else — Jerry Seinfeld.

“The structure of a good suit kind of structures the attention of the audience. It’s like, ‘We better listen to this guy — his jackets and pants match.’” 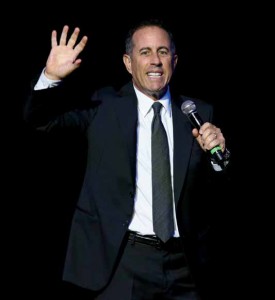 Jerry Seinfeld, photographed by Greg Allen of the AP

With his eternal sitcom cred and his king-of-comedy swagger, Seinfeld is the Sinatra of standup. He’s just got that master-of-his-domain air about him — not so much a cockiness as a I-know-you-know-who-I-am kind of cool. It comes across in the almost imperial, dynamic way he commands the stage, in the suit and tie that sets him apart from most other standups, in the dogmatic delivery and spit-shined material that just takes it for granted you’re going to LOL — and doesn’t stoop to blue to get you to.

It’s an attitude that stood out in his 2018 appearance on David Letterman’s My Guest Needs No Introduction, when he turned the tables on his host to interview him — and at one point possessed the chutzpah to spit out, “You’re David Letterman, you idiot.” (Apparently no offense was taken — the line became the title of the episode.)

It’s the sweet savoir-faire of success, the kind one can pull off after having conquered television like no other standup comedian ever has, after having approached billionaire status largely because of it, and, yes, even after having expanded the lexicon of an entire nation with his own kooky catchphrases. Not that there’s anything wrong with that.

And that doesn’t include the success he’s had since the show ended (though it remains an addiction for fans in syndication and on Netflix). There’s the touring, of course, as well as two Netflix standup specials. There’s also the self-indulgence of Comedians in Cars Getting Coffee on Netflix, and the curious choice of Bee Movie, the 2007 animated film that he co-wrote and produced. And in which he cast himself as a bee. Not that there’s …

All of which has yet to eclipse Seinfeld’s sitcom glory. (Then again, how could it?) But his best shot at reclaiming the American zeitgeist may soon be coming to a screen near you, as the TV star makes his first foray into live-action features. Shot this summer, Unfrosted was co-written, directed and produced by Seinfeld, who stars with a stellar cast including Melissa McCarthy, Amy Schumer, Hugh Grant, Christian Slater, James Marsden and Jim Gaffigan. At press time, likely release dates are late this year or early next.

Unfrosted is based on the comedian’s standup bit about the invention of Pop-Tarts, the toaster pastry that rocked Seinfeld’s world as a schoolkid. And it is one more creation inspired by the pandemic.

“Stuck at home watching endless sad faces on TV, I thought this would be a good time to make something based on pure silliness,” Seinfeld told Deadline.com last year. “So we took my Pop-Tart stand-up bit from my last Netflix special and exploded it into a giant, crazy comedy movie.”

“‘I’m going to take care of you in a way you’re not even going to understand till I’m probably dead.’ That to me is what being a great dad is.” 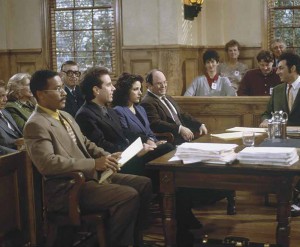 The 1998 Seinfeld finale, one of the most shark-jumping sitcom clunkers of all time, was all the more disappointing in light of the series’ 180-episode joyride. Ending with the gang of four thrown into a jail cell for violating a Good Samaritan Law, the two-part episode was however somewhat redeemed for force-feeding them the just deserts of their nine-year adventure in egocentricity.

Whether or not Seinfeld himself possessed the same lack of empathy as his sitcom counterpart, the semi-autobiographical nature of a show about a young New York City comedian named Jerry Seinfeld makes it easy to draw parallels to the actual person of the same name. So it was easy to see Reality Jerry, who didn’t tie the knot until age of 45, as the other half of a Venn diagram with Sitcom Jerry, who thought as highly of marriage and kids as he did his neighbor Newman. 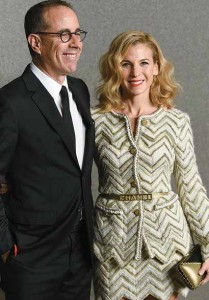 Jerry and Jessica Seinfeld, photographed by Evan Agostini of the AP

Which makes Seinfeld’s eventual fatherhood experience, if not surprising, rather poignant and, dare I say, even altruistic. It’s reasonable to presume the influence of his wife, Jessica, who after their first child was born, founded an organization that redistributed cribs, strollers and other essentials to struggling families.

She called the charity Baby Buggy and then in 2016 renamed it the Good+ Foundation. Seinfeld, now a 68-year-old father of three teenagers, heads its Fatherhood Leadership Council. Composed of nearly 60 dads, the council raises funds and awareness to not only help fathers engage with their kids, but also to assist families that live in a home with no father.

“I have always been involved in Jessica’s work, but it wasn’t until the organization started focusing on the importance of fathers a few years ago that this work became very personal to me,” Seinfeld said in a 2017 interview with “The Journal” of Mr. Porter, an online menswear retailer.

The Good+ Foundation has provided more than $80 million worth of essential household items, and this summer it raised a record $800,000-plus at the Seinfelds’ Good+ Night of Comedy benefit, held on the lawn of their home in Amagansett, Long Island.

Seinfeld believes Good+ has helped to change a perception about dads. “People had kind of dismissed them and just assumed they didn’t want to be involved,” he said in a Vanity Fair story about the event. “You know, dads, however they become dads, are always caught by surprise that they love being dads. Almost always.”

Perhaps he was speaking from experience. Now the world’s richest comedian, Seinfeld was even moved a few years ago to submit a letter to the editor of The New York Times.

“I am not an expert,” he wrote, “but I am a father and I’ve spent some time talking to other dads in fatherhood programs through the Good+ Foundation … The dads I meet in these programs have the same motivations that I do as a parent. They want their kids to benefit from them; they want Mom to see the value of their input; and they want the feeling of self-worth that comes from being an engaged dad.”

Not exactly what you’d expect from a former Good Samaritan lawbreaker — fictional or not. 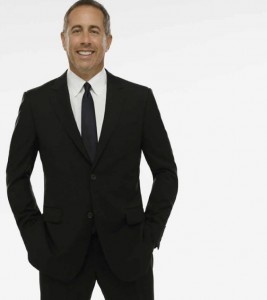 Jerry Seinfeld appears at the Broward Center for the Performing Arts in Fort Lauderdale at 7 and 9:30 p.m. on Friday, Jan. 6. Tickets start at $67.50, browardcenter.org.

He also will appear at the Kravis Center for the Performing Arts in West Palm Beach at 7 and 9:30 p.m. on Saturday, March 18. Tickets start at $80, kravis.org.

HOW WELL DO YOU KNOW JERRY’S JOKES? Play Seinfeld trivia in the online edition, http://digitaledition.qwinc.com/publication/?m=24202&i=768159&p=68&ver=html5