Home improvements that pay off at resale time

You want a chickee hut, do you? You know, the real thing, built by someone who knows what they’re doing, with a nifty little charging station and a ceiling fan and maybe even a small fridge. It doesn’t even have to be stainless steel, although that would be super sweet. But your wife says it would be a bad investment. Silly. Frivolous, even. You’d never get your money back when you sell the house and move to something smaller. And this four-bedroom house has got to go, or so she says.

The level-headed missus? Or you, the funster, the guy with the closetful of Jimmy Buffett shirts who could throw one heck of a Kentucky Derby party under that chickee hut?

As it turns out, you both might be barking up the same coconut palm tree.

“It really does depend on how long you’re going to be in the house, what money you want to spend and how much enjoyment you will get out of it,” says Jill Jones, an interior decorator with Brown’s Interior Design in Boca Raton. “If you’re planning on selling, some improvements might not be worth it.”

In her 30-plus years working with South Florida homeowners, Jones has seen new homeowners pull out pretty much everything in a remodeled home because the improvements didn’t match their tastes.

“Was it usable again? Absolutely. Was it horrible? No. But if the buyer doesn’t like it, he’s going to rip it out,” she says.

Maybe the granite counters in the kitchen were stunning but they were black, not gray. Perhaps the master bath featured a claw-foot tub – remarkably restored – but the new homeowners wanted something big, with jets, for two. From entryway lighting to dining-room wallpaper, wood floors to farmhouse sinks, it’s all about a homeowner’s personal taste. And, of course, the pocketbook.

“If you’re going to stay and enjoy it, then you might get your money’s worth,” says John Castelli, president of the Greater Fort Lauderdale Realtors Association. “If you’re not planning on selling, then the only one you have to please is yourself.”

We asked experts to weigh in on what gets a good return on your home-improvement dollar and have included some helpful industry statistics. For example, a new roof in South Florida will recoup 116 percent of your investment, while the national return rate on a new roof is only 68 percent, according to a recent study on renovations.

And how about a quick exterior paint job, a remodeled master suite, a beautiful new cement pond? Yes, yes and no, in that order. 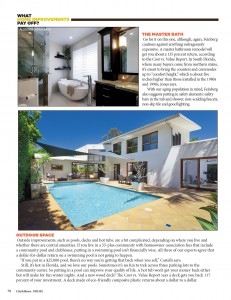 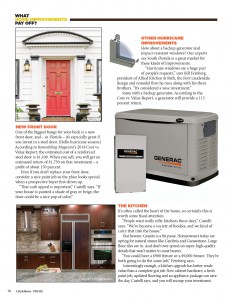 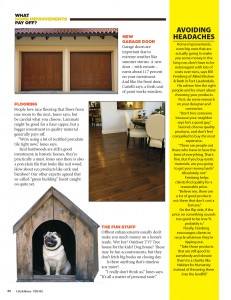