The Clyde Butcher Gallery in Big Cypress National Preserve has an Ochopee address, though from the looks of it the gallery is the only human-made structure for miles. Set back from the road on the eastbound side of Tamiami Trail, the single-story wood-sided building can pass in an instant. The first time I visited the gallery, I nearly lost it among the cypress trees before I knew to turn on my blinker and pull off the highway.

Growing up in this part of the state, I’d admired Clyde Butcher and his black-and-white photography for years. I’d seen his work on display in and around Naples and Fort Myers. In addition to his photographs, he stands for a kind of fierce environmentalism. Once I heard him give a fiery presentation on the importance of protecting Florida’s wild places. “It’s nearly too late,” he’d warned.

The parking lot of the Clyde Butcher gallery was empty. Florida was deep in its slow summer months, a time of heat and rain and mosquitoes and not much else. I nearly fell over the young woman crouched at the edge of the pond beside the parking lot. She popped up when she saw me and smiled happily. “We’ve got baby alligators,” she announced, pointing to the little reptiles floating in the water. They watched us with their green eyes. “We’ve been waiting for them to hatch all summer.”

We squatted down together and admired the hatchlings swimming among the duckweed. “You’re here to see the gallery?” she asked. I nodded. “Go on in when you’re ready,” she said. “I’m going to stay and watch these guys for a minute.” 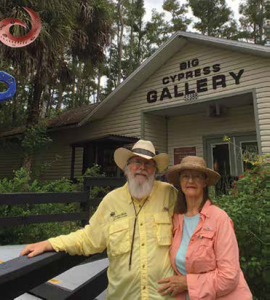 The entrance to the gallery was as unassuming as the gallery itself. A few wooden steps, a glass door like you’d find at the entrance to a hardware store or a bait shop, the bracing chill of air conditioning once I stepped inside. I turned to go into the main room and stopped. A giant large-format print covered one wall, a black-and-white shot taken deep in the swamp. I placed a surprised hand over my heart. This wasn’t the politely framed photos I’d seen in galleries and museums. This was something else. Enormous, strikingly beautiful, as rich in detail as if I were standing in the swamp myself. I felt as if I had walked into a sacred space. Not the kind built by human hands, but a quiet and holy place in the wilderness.

Clyde Butcher began his career as a commercial photographer then a successful landscape photographer. His early medium: the giant redwoods of California. Trained as an architect, Butcher had an eye for form and patterns. He could pick out the visual appeal in a scene of natural chaos. Standing in his gallery, taking in the photographs hung on the wall, I saw that Butcher was not simply capturing images. He wasn’t just working with the play of light and shadow. His photographs are a kind of soul work.

Though he had travelled widely in his early photography work, grief brought Butcher to Florida. When his son was killed in a car wreck, he joined a long history of those who have come to this state to hide — Creek Indians and escaped slaves; Civil War deserters; poachers, thieves and those on the run from the law. Like the others, Butcher intended to melt into the swamps of Southwest Florida. He hoped that the sadness that had chased him there would give up and go home. It was a strategy that had worked for those who came before him. Few lawmen dared face this hostile landscape with its crushing heat and clouds of mosquitoes.

But Butcher soon discovered what those who know grief always come to find out. There’s no escaping it. His heartache followed him even here, where only the hardiest dared venture. Knowing that he couldn’t outrun his sadness, Butcher set about transforming it. He went into the wild places of Southwest Florida with his camera. When he found a spot he liked, he waited. Sometimes he waited all day; sometimes he had to come back another day. He waited until the landscape opened to him, until it gave him permission to take his photo. And then he took it, often a single shot.

The photographs in Butcher’s gallery all contain the essential feeling of those excursions—a silence, a stillness, a connection. He’s named his work for the places the photographs were taken: “Billie’s Bay,” “Indian Key,” “Blue Cypress Lake,” “Estero Island.” In “Cigar Orchid Pond,” he’s turned the overwhelming mass of vegetation inside the frame into a single scene where bromeliads, ferns and orchids draw the eye. In “Tamiami Trail 1,” he’s captured a scene visible from the Tamiami Trail, a stand of cabbage palms in the distance, miles of waving saw grass, the first thunderheads of a summer storm collecting overhead.

This last one stopped me inside the gallery, holding my breath, afraid to break the spell. Though I grew up in Florida, I left as soon as I could. It took me more than a decade away from this state before I could finally name the gnawing ache in my heart — homesickness. Now that I was home, I saw the beauty of Southwest Florida everywhere. I realized that Clyde Butcher saw it too. 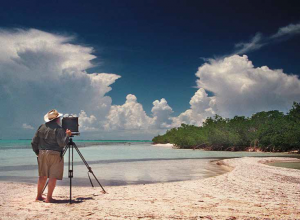 That beauty wasn’t just in the beaches and coastlines, the parts of Florida that most people agree are beautiful, it was in the lesser-known spots, too — the bromeliad-covered oaks, the stands of dwarf cypress, the longleaf pines enshrouded in mist, the dry scrub, the hidden rivers, the moon rising over a watery plain. I stood inside the gallery surrounded by these images, and I felt as if Clyde Butcher had brought me inside the beating heart of this state. For the first time, I understood why he’s such an outspoken advocate for Florida’s wild places: for the simple reason that they’re worth protecting.

The last two hundred years have seen this state dredged and drained and paved over, but Clyde Butcher’s gallery offers an antidote to all that. His work shows the beauty of Florida’s natural places, just as they are. “Come, look,” the gallery seems to say. “You’ll leave here wanting to protect them, too.”