Wines to open to celebrate a milestone

Milestones and life events – such as a 20th anniversary – call for a celebration, and there’s no better reason to open a really special bottle of wine in honor of the occasion.

Master Sommelier Juan Gomez knows something about celebrating with just the right wine. Not only is he the Beverage Director of The Breakers HMF restaurant in Palm Beach, he and fellow MS, Virginia Philip, manage The Breakers’ 50,000-bottle Wine Spectator Grand Award wine collection. The collection includes 60 percent domestic selections, 25 percent from France and Spain, and the remaining 15 percent from the Southern Hemisphere. The duo also creates the beverage programs at the other 10 restaurants owned by The Breakers corporation. 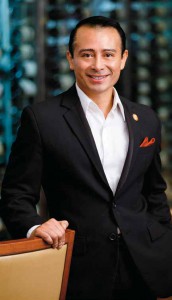 He and Philip are often consulted by guests hoping to celebrate a big event with a memorable wine. Gomez, who has worked at The Breakers for 21 years, became a Master Sommelier in 2007. Although the day he passed the MS exam did include a little Champagne and 1992 Château Latour for himself, he also fondly reminisces about consuming another one of his favorite beverages: Anejo tequila.

Well, that depends. At those prices, you are paying a premium for the privilege of opening an exceptionally rare wine – and perhaps sharing an experience you’ll never forget. (Or ever finish paying for it, even on an installment plan).

I have had Domaine de la Romanée-Conti wines – although not the coveted 2005 – twice in my life, and both times they were excellent. They were poured at significant celebrations for friends in the wine industry, and it was as much about the experience as the expectation. Having the opportunity to drink what many consider the best Burgundy in the world is extremely notable.

To some the experience is more important than the money. While I’m grateful to have had the opportunity to taste this epic wine you won’t see me opening a bottle of it anytime soon. Unless, of course, I get a bottle as a gift.

If that happens, you’ll hear about it right away!

Other things to consider:

Trust, but confirm. Just because a Left Bank Bordeaux comes from a great vintage doesn’t guarantee every wine from that region is going to be terrific. There are a lot of variables to consider: vineyard location, type of grape clones, conditions and sugar levels at harvest; and, most importantly, the winemaker’s philosophy and style. Take time to check out winery reviews and, if possible, the winemaker’s background philosophy.

Beyond bubbles. While celebrating with Champagne and sparkling wine can add a festive flair to an event, don’t feel it’s mandatory. Especially if your focus is on the stunning bottle or two you’re excited to drink that evening. Starting with the best wine of the evening can also set a great tone for the celebration.

Check out surrounding areas. If you’re not wanting to pay the price tag that can be attached to some popular wine regions check out some of the wineries in lesser-known appellations in the vicinity. For instance, while 2015 was a stellar year for Right Bank Bordeaux, such as St. Emillion and Pomerol, it was also a terrific year for Fronsac and Castillon.

Here are some special wines to drink now or save for your next celebration.

Peg San Felippo is a certified sommelier who has served as a judge in the annual American Fine Wine Competition, South Florida’s homegrown wine event; and THE Rosé Competition.