Whether you collect wine seriously – or just have a few bottles on hand – finding a place to store them at home can be a challenge. These racks fit anywhere, and can add a decorative element as tasteful as the wine. See some prime examples pgs. 62-63 of our digital edition, https://bit.ly/3bASyV7 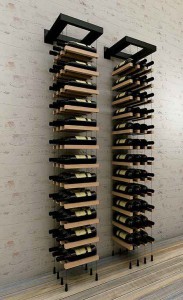 Buoyant Wine Storage founder Miguel Christie worked on his cable wine racks for a decade. As a designer for retail components, Christie was hired in 2009 to design a wine rack for a customer and, shortly thereafter, got a contract from another client to develop a cable retail display system. That’s when he decided to combine the two. “I wanted to make sure every element of the design and the materials were viable before it was released,” Christie said of his now patented design, launched last year. His adjustable column racking units come in three styles: free standing, wall or ceiling mounted. “It was important that it looks good regardless of how much wine it might be holding,” he says. “Our racking works with all types of décor.” From $429, buoyantwinestorage.com. 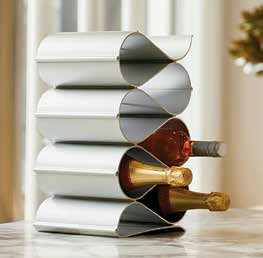 Known as the “wave” wine rack, Echelon was developed in 2001 by two designers in Sydney, Australia. “While it does have a wavy appearance each individual slot is actually egg shaped,” says Echelon founder Rohan Macarthur-Onslow, who came up with the initial drawing. “It was imperative that the shape of it was attractive as a standalone on top of a table or counter, but also would add dimension and an appealing aspect if someone were going to insert it in an open cabinet or back light it and mount it on a wall.” The standard rack slots can accommodate up to a 3.6-inch diameter bottle, which means regular size as well as most champagne bottles will fit together nicely in the same unit. From $109, echelonproducts.com. 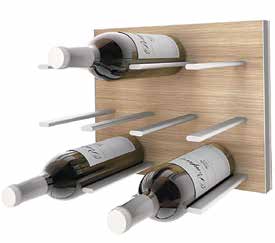 The concept for Stact Wine Displays Inc. began in 2012, when founder and president Jamie Kasza and his wife were moving into a condo in Vancouver. They didn’t consider themselves connoisseurs but, “We didn’t want to just stuff the wine in a closet somewhere,” Kasza says. “So it got us thinking about something that would work that was contemporary, versatile and reasonably priced.” While Stact prides itself on wine racks for any budget, one customer presented them with a challenge: to design a system showcasing his stellar collection of wines and exotic cars. Their solution was a 4,200-bottle storage tower – with UV-resistant glassed and temperature and humidity controlled “rooms’’ – with two parking spaces on the top. “It’s kind of like the bat cave,” the manufacturer says, “but with wine.” From $100, getstact.com.