What I didn’t know then about the Super Bowl

Broadway Joe Namath and I had two things in common: We were both at the Super Bowl on Jan. 12, 1969, in Miami. And we both didn’t understand what happened that day.

Other than that, Broadway Joe and I had nothing in common.

He was from the East.

I was from the Midwest.

He was the quarterback of the New York Jets.

I was a loyal fan of the Kansas City Chiefs.

Broadway Joe had been to South Florida before, with his college teams for the Orange Bowl.

It was my first time here, with my family for my dad’s medical convention.

He was staying in Fort Lauderdale, at the Galt Ocean Mile Hotel.

I was staying in Miami Beach, at the Eden Roc.

He was relaxing by the pool, two days before the Super Bowl, surrounded by reporters wondering how he felt about playing in the big game Sunday against the Baltimore Colts.

I was playing in the surf behind the Eden Roc, surrounded by seagulls, wondering how a kid from Kansas City could be outside in January in shorts and a T-shirt.

Broadway Joe went with his teammates to the Yankees spring training camp in Fort Lauderdale each day to get ready for the game.

I went with my mom and sister to the Seaquarium on Key Biscayne while my dad went to his meetings.

After practice, Broadway Joe partied at the Galt Ocean Mile where, according to The New York Times, “the wife of the team’s equipment manager jumped off the high dive into the swimming pool with her clothes on.”

After the Seaquarium, I went to the lobby of the Eden Roc and bought a roll of pennies at the front desk for my coin collection back home. (I still have that roll, children, though they were shinier then.)

On Jan. 9, 1969, the Times reported, “a limousine took Namath from [his] hotel, where his teammates held a barbecue, to Miami Villas and a room called the Playhouse, where the Miami Touchdown Club was set to honor him as football’s most outstanding player.”

On Jan. 9, 1969, an elevator took me and my family down to the lobby for a fancy dinner at the Eden Roc. We don’t remember what we ate that night under the chandeliers, but we do remember the bill: $100! It was the most we’d ever spent for a family dinner out. It felt wrong – about $700 in today’s money! – and something we would have never done in the Midwest.

We felt full and happy, but ashamed.

Meanwhile, Broadway Joe was accepting the Touchdown Club’s FAME award, wrote Luther Evans of The Miami Herald, then promised the Miami Villas audience, ‘the Jets will win Sunday, I guarantee it.’” He said later he got in trouble with his coach the next day for saying that, but that it didn’t feel wrong to him.

He felt full of confidence, and was not ashamed. 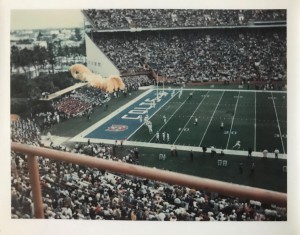 The view from our seats in the upper decks of the Orange Bowl.

The Jets had gotten there by having the best record in the American Football League, but they were 18-point underdogs against the National Football League Colts.

The Colts quarterback, Earl Morrall, had a crewcut like mine.

Broadway Joe wore his hair a little long. He often wore a jacket without a tie off the field, too.

“Namath’s a hippie!” read one poster in the stands.

We guessed that he was, at least by Midwestern standards. (My dad wore a jacket and tie to the game. It’s what adults did.)

I walked onto the upper deck at the Orange Bowl with my dad about the same time Broadway Joe was taking the field. We don’t remember how we got the tickets, which cost $12 apiece, but they were bleacher seats overlooking the 30-yard line. I know that because I still have half the ticket stub. (Back then, children, Super Bowl tickets were regarded as tickets – torn in half at the gate – not holy relics.)

Broadway Joe had guaranteed a win that day, and he was entirely focused on the game.

I was not. Neither of these teams were my team, so I really didn’t care who won.

I didn’t know anyone who’d watch a game with teams they didn’t care about, so why talk about it at all?

He was up by 7 at halftime, thrilled to see the way his Jets were performing on the field.

I was 11 and bored at halftime, watching the marching band from Florida A&M form parallel lines and various shapes on the field. (This was years before Prince or Justin Timberlake or Janet Jackson ever trod a halftime stage, children. We bore up.)

Broadway Joe stormed back onto the field after halftime, just as focused on the big game as he was in the first half.

I was focused on a big man in a black short-sleeved shirt sitting in the row behind us.

“To Mark, a friend of the Kansas City Chiefs,” Lothamer wrote on the cover of my Super Bowl program, after I worked up the nerve to ask for an autograph. (I didn’t ask how a professional football player wound up with tickets a row worse than ours.)

Broadway Joe went on to lead the Jets to a 16-7 victory, in a game many consider one of the greatest in Super Bowl history. He put his finger up in the air as he ran off field in victory, the only time, he said later, he ever did that.

It looked like showing off to me, something we’d never do in the Midwest.

The game that was “probably the most important one in NFL history,” USA Today wrote in a ranking of Super Bowls last August.

“The victory [that] helped transform the AFL-NFL world championship into the game we all call the Super Bowl today,” said The Sporting News.

“The Super Bowl was not just literally made in Super Bowl III,” Sun Sentinel columnist Dave Hyde wrote. “It was made as a sporting centerpiece in America by Namath and his Jets.”

The centerpiece? I didn’t understand. 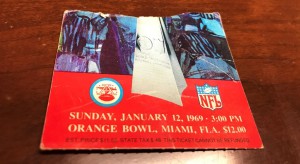 A year ago, on the anniversary of the game, Jan. 12, 2018, New York Daily News sportswriter Wallace Matthews asked Broadway Joe about “the most important professional football game ever played.” How it eventually changed everything, from the kind of seats we’ll sit in Feb. 2 for this Super Bowl in Miami, to the entertainment we’ll get at half-time, to the commercials that’ll sell for millions by the second, to the tickets we’d never let anyone tear in half at the gate because, today, they are holy relics.

And, apparently, in the biggest place of his life, too.

“Mr. Namath had fond memories of South Florida from his two appearances in the Orange Bowl as Alabama’s star quarterback and he said he felt at home when he stepped onto the tarmac in Miami [for Super Bowl III],” The Wall Street Journal reported in 2010.

“I just developed a love for the tropics,” Broadway Joe said.

“He remembers getting out of the airplane and feeling the heat, and then on the drive to the hotel seeing flowers and lush vegetation all around, and feeling both puzzled and enamored with the weather,” according to another profile in 2017 in Florida Coast magazine.

“That was the clincher,” he said.

Broadway Joe moved here in 1970. He still lives here, in Tequesta off the Jupiter Inlet.

I thought back to my first time with him in South Florida. The flowers and lush vegetation in winter. The real-life sharks swimming under my feet at the Seaquarium. The fancy dinners with my family at hotel restaurants on the beach. The ocean lapping my ankles in January.

The feeling I was in the centerpiece of America.

Broadway Joe was 27 the year he moved here.

We had more in common than I knew.

MAIN PHOTO:  Me and my program at the Orange Bowl, Jan. 12, 1969. Ed Lothamer of the Kansas City Chiefs, in the black shirt in the row behind, autographed it.