I don’t know if cabin fever is a real thing.

I know people talked like it was when I was a teenager on summer vacations at my grandparents’ cabin in Southwest Colorado. People would say the winters were so cold, gray and monotonous up there in the San Juan Mountains, that people cooped up in their cabins could go crazy from it. That they’d start climbing the walls, talking to themselves, engaging in strange behaviors, even running wild out the door into snowdrifts until the bitter cold broke the fever – or flash froze them whole.

Terrible things could happen to people with cabin fever, they said – up to and including that unpleasantness back in 1874 with Alferd Packer and his party down by Lake City. So terrible, people would hush up and say no more about it at the mere mention of Al Packer’s name. (Especially if anybody was eating.)

So terrible, gentle reader, I’ll leave it to you to guess what happened there. Or you can just Google it. (Don’t say I didn’t warn you about not eating when you do.)

There was never much risk of me catching cabin fever, though. I always came down from the mountains in late summer and would be back at school long before the first snows flew in the high country. That’s what most sensible people did – including my grandparents – who closed up their cabin and left the lonesome slopes for some less cold, gray and monotonous place.

Some even went as far as South Florida. Not that we’re out of the woods here.

I know people talked like cabin fever was a thing here too, even before the pandemic lockdowns sent us all indoors to stare at our walls for months on end. Some would say the summers were so hot, humid and monotonous that people cooped up in their homes could go crazy from it, too. That they’d start climbing walls, talking to themselves (on something other than the phone), engaging in strange behaviors.

There was little chance they’d run into actual snowdrifts when they ran out the door. But the mosquitoes were just as bad.

Terrible things could happen to people with cabin fever here, too, they said – up to and including that unpleasantness back in 2017 after Hurricane Irma. So terrible, people cooped up in their homes gladly sat in lines for drive-thru-window food just to get out of the house. They’d hush up and say no more about it at the mere mention of the Burrito Supreme or the Whopper with Cheese or the Chocolate Frosty. (Especially if anybody was eating.) 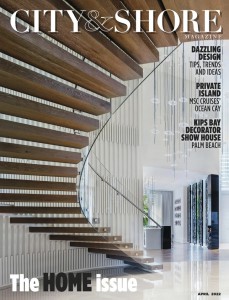 So before we get any closer to summer – before we get too deeply into that hot and humid period between April 15 and Oct. 15 – we offer our annual HOME Issue, full of ideas for making your home more beautiful, practical or just tolerable for long stretches when the outside keeps you in.

A medicine cabinet of antidotes for any cabin fever.