Heading into the heart of South Florida’s black-tie season, the tuxedo still reigns as the final word in formal attire. How you choose to accessorize, however … is a matter of style.

First worn by British knights in the 19th century, the “Smoking Jacket” was manufactured in 1860 by Henry Poole & Co for the Prince of Wales, later King Edward VII. Several years later, when American James Potter adopted the style and popularized it among the trend-setting swells of the Tuxedo Park Club in New York, it acquired a new name. Although there have been some changes over the decades, the tuxedo itself has never gone out of style.

As a Fashion & Style director, I’m disheartened when I see men wearing a “substitute” to a black-tie affair. There really is no substitute. 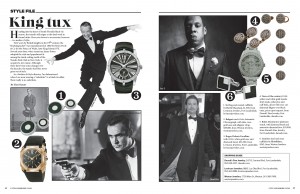