The December issue unwraps this weekend with a profile of Big Kenny Alphin and John Rich, who’ll serve as grand marshals of the Dec. 9 Winterfest Boat Parade.

After the mass shooting in Las Vegas, the duo – who had performed on stage just minutes before the Oct. 1 shooting began – put out an appeal via social media for a GoFundMe campaign that’s so far raised over $11 million for the victims.

“The good thing that comes out of times like this,” Big Kenny says, “is you get to show a little more of your appreciation towards those people that are there on the front lines protecting our freedoms every day and just the everyday heroes that are willing to run toward catastrophes to help people. I feel strongly positive from things like that in a greater way than our spirits can be torn down by the tragedy. You know, I believe that in the end, the good guys always win.”

We’ll also get last-minute gift guide advice, for any procrastinators in the audience; listen to designers on how to enhance the dining room, one of the most used rooms in the house; sit down for some unique dining experiences for the holidays (and beyond); consider six winter escapes to take – or to just dream about; and take a walk in a winter fashion wonderland of our own.

All this and more this weekend in the December issue of City & Shore Magazine, in print, online and on iPad. 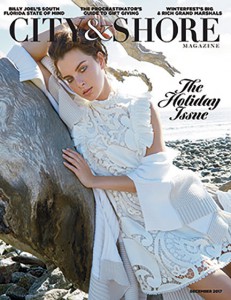 When in Milan, get the risotto – even during a pandemic

The culinary reinvention of Nassau

Ten dock-and-dine restaurants that will float your boat