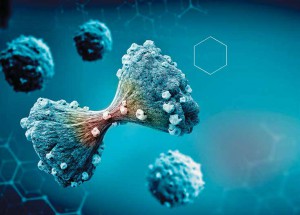 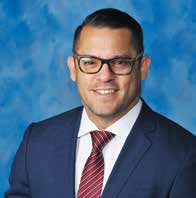 A procedure known as “hot chemotherapy” is offering new hope to patients with cancers that have spread to the lining of the abdominal cavity, says Dr. Omar Llaguna, a surgical oncologist with Memorial Healthcare System. Hyperthermic intraperitoneal chemotherapy (HIPEC) can be used for metastasized colon, ovarian, colorectal, mesothelioma and appendiceal cancers. It may significantly extend life and improve its quality, and in some cases, offer new possibility for a cure, Dr. Llaguna says.

Tumors that start within an organ may grow through, or perforate it, and then shed cancer cells directly into the peritoneal, or abdominal cavity. Those cells may then implant on organ surfaces and grow into new tumors, which in turn shed invisible cancer cells into the cavity, eliminating the option of surgery. In the past, these patients usually could not hope for a cure, Dr. Llaguna says. “The disease can be microscopic, and the use of chemo has been limited; chemo given intravenously doesn’t get into the peritoneal cavity. [HPIEC] allows us to take patients who were palliative and bring surgery back to the table.”

The process works like this: First, all visible tumors are removed surgically. Next, catheters that allow fluid to flow in and out are placed into the abdomen. Heated saline solution is introduced into the abdomen, and chemo is added to the saline and kept there for about 90 minutes. “It’s like a washing machine,” Dr. Llaguna says. The dose can be significantly higher than with intravenous chemo, and cancer cells are selectively more sensitive to heat than normal cells, he says. Studies show that the treatment may lengthen survival rates four or five times as long as intravenous chemo for these types of cancers and, in some cases, offer the possibility of a cure where none existed before. It rarely causes unpleasant side effects like nausea and hair loss because it does not go through the bloodstream.

Memorial Cancer Institute has treated about 20 patients with HIPEC. One of them, Luis Feliciano, was diagnosed with Stage 4 appendiceal cancer. About a year ago, Dr. Llaguna performed surgery that removed numerous visible tumors, followed by heated chemo. So far, his scans have been clear, Feliciano says. “It’s great news,” he says, “for myself and for the whole team.” 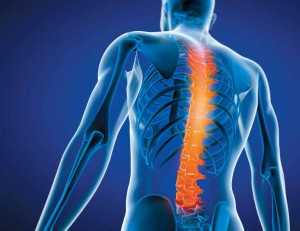 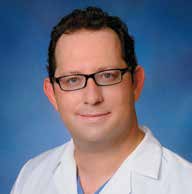 Away with back pain

Chronic back pain can make life miserable. A procedure performed at Aventura Hospital and Medical Center is helping patients for whom physical therapy and traditional surgery, with the insertion of screws and rods, haven’t worked. “In those cases, we ask, what else can be done?” says Dr. David Krieger, neurosurgeon at Aventura Hospital and Medical Center. While the procedure itself has been around for a while, new technology has provided significant improvement to the results.

The treatment changes the signals from the nerves and spinal cord to the brain, causing the brain to interpret the signals differently and changing the patient’s perception of pain. A spinal cord stimulator, consisting of a paddle containing electrodes, is implanted in the epidural space or on the spinal cord, either in the mid back to control lower back and leg pain, or in the neck to control neck and arm pain. “It’s like a pacemaker for the spinal cord,” Dr. Krieger says.

Some people, Dr. Krieger adds, prefer to keep the paresthesia sensations some of the time, and it is possible for them to switch back and forth from one program to another, sometimes synched with a smartphone. “We’ve learned that the new technology can be very effective, but it doesn’t completely replace the old technology,” Dr. Krieger says. “Treating pain is difficult, and we want to use everything available.” 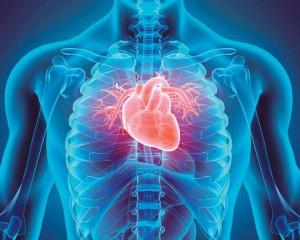 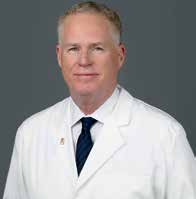 Traditional open-heart surgery requires a large incision in the chest, breaking the sternum and temporarily stopping the heart. By contrast, Dr. McGinn’s technique requires only one two- or three-inch incision and two half-inch portals, all between the ribs. “We’re not cutting any muscles or breaking any bones,” Dr. McGinn says.

Developing the procedure required creating specialized tools: A retractor exposes the heart between the ribs, and a positioner latches onto the tip of the heart and allows the surgeon to move the organ around. A stabilizer, a two-pronged fork with suction cups, holds the artery still. The diseased portions of arteries are bypassed with grafts from healthy arteries or veins. The patient is usually discharged within two to three days and can go back to full, unrestricted activities within a week. Dr. McGinn says he developed the procedure because many of his patients had other conditions that made traditional surgery risky. “These patients,” he says, “really needed something minimally invasive.” 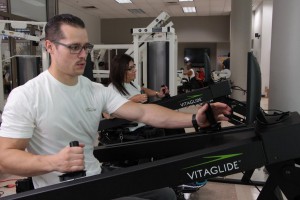 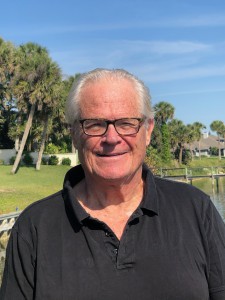 Maintaining physical fitness from a wheelchair presents special challenges. VitaGlide, a push/pull piece of equipment specifically designed for anyone who needs to do seated exercise, can help. The new VitaGlide is a redesign of an earlier version that has been off the market for several years. It offers both upper body and cardiovascular workouts while minimizing risk of shoulder impingement or rotator cuff injuries caused by over repetition of the same arm movement, says Hugh Stevenson of Miami, who owns VitaGlide with his wife, Marcy Ullom.

“The VitaGlide is a seated workout intended for use by people who have limited or no mobility in their legs and cannot achieve a traditional cardiovascular workout,” Stevenson says. “It’s not just an arm workout, as it provides the opportunity through resistance to increase heart rate and develop upper body and core strength with cardio conditioning.” Increased upper body strength allows wheelchair users to better manage movements like lifting their bodies in and out of the wheelchair into a car or bed, he adds.

It works like this: Two independent handles governed by two separate resistance motors provide simulations of both the push-pull motion used in cross-country skiing, including torso rotation, and the push-together, pull-together motions used in rowing. A user guides his or her chair into a V at the front of the machine to gain access to arm channels and the control panel. Each of the machine’s arms operates independently of the other, allowing resistance to be controlled separately. Tension can be set to several different levels, and a digital timer records time spent and elapsed distance. Alan Colpas of Concord, N.H., who became a paraplegic after a motorcycle accident, says he lost 60 pounds and gained significant muscle using the VitaGlide. “It gives a good workout,” he says. 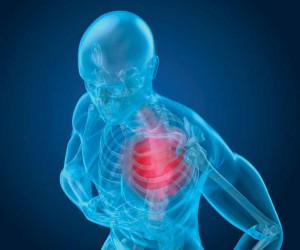 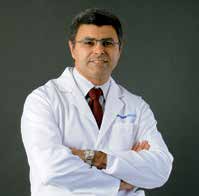 Physicians at Broward Health Medical Center are adding a robotic magnetic navigation system for treatment of cardiac arrhythmias, or irregular and abnormal heartbeats. Broward Health will be the first hospital in South Florida to offer the new Stereotaxis robotic technology, says Dr. Ahmed Osman, director of electrophysiology at Broward Health.

An arrhythmia is caused by a short circuit or abnormal electrical impulse from one of the heart’s chambers that causes beats that are too fast, or in an irregular pattern. When left untreated, arrhythmias may significantly increase the risk of stroke, heart failure or sudden cardiac arrest.

The condition may be cured with an ablation. “The new technology helps enhance the reach, precision and stability of the traditional tools used in ablation therapy, while having inherent attributes that can increase safety,” Dr. Osman says.

The procedure begins with the physician using 3D imaging to insert catheters through a vein or artery into the affected chamber of the heart. Instead of manipulating the catheters manually, the doctor guides their tips with a magnetic field, which is adjusted with a computer, until the catheters reach the precise spot where the arrhythmia originates. Radio frequency is then used to ablate the arrhythmia. Unlike traditional catheters that are rigid, the Stereotaxis catheters are flexible, reducing the risk of complications. The patient is also exposed to less radiation than with a traditional procedure.  “It allows us to treat complex and difficult arrhythmia, particularly in the ventricles, with highest cure rates,” Dr. Ahmed says. 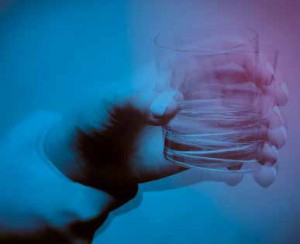 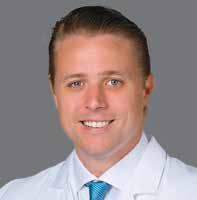 Approximately 7 million people in the United States suffer from essential tremor, a condition caused by an abnormal circuit in the brain. ET often affects the hand or arm and can be so severe it prevents the individual from using a fork, holding a glass or shaving, says Dr. Justin Sporrer, a neurosurgeon at Baptist Health’s Miami Neuroscience Institute. Disrupting the circuit can reduce the tremor, but in the past, medications which can have unpleasant side effects or brain surgery were the only available treatments.

Now, high intensity focused ultrasound offers an alternative. After the affected area of the brain is identified with an MRI, more than 1,000 HIFU waves are applied to it, heating the cells to cause an ablation. The procedure is more than 90 percent effective. “The goal is to permanently reduce the tremor,” Dr. Sporrer says, “so the patient can get back to a normal life.” 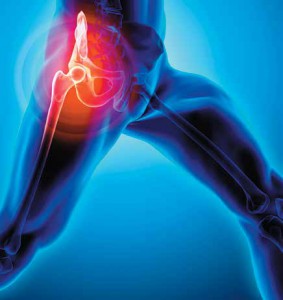 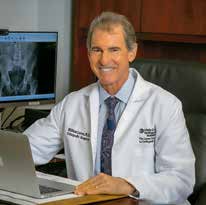 With classic posterior hip replacement surgery, the physician gains access by cutting the short external rotator muscles that help move and stabilize the joint, and then repairs them afterward. There are a number of post-surgical restrictions, and recovery takes about six weeks. With SPAIRE (Sparing Piriformis and Internus Repair Externus), the surgeon creates a window under the muscles and uses special retractors to work through the window. “This leaves the natural cloak of muscles intact, so it is not necessary to avoid any positions after surgery; that is, hip precautions are not necessary,” Dr. Leone says.

SPAIRE allows more precise placement of the femoral stem and results in fewer complications like femur cracks and nerve injuries, Dr. Leone says. Many patients are back to normal activities after four or five days. “I’m routinely shocked by how well people are walking and how good they feel.”