Over 650 women, men and some very extravagantly dressed canines  descended on downtown Fort Lauderdale Saturday for the sixth annual Glam Doll Strut. The event, part of the Glam-A-THON series, is a fundraiser for Broward Health Foundation. Proceeds — the final numbers haven’t been announced yet, but Publix donated over $20,000 — will be used to provide funding for women battling breast cancer, as well as mammograms, diagnostic testing and special assistance for medication, wigs and other ancillary items at the Lillian S. Wells Women’s Health Center at Broward Health Medical Center and the Lisa Boccard Fund at Broward Health Coral Springs.

Esplanade Park and the Himmarshee Historic District was a sea of pink, feather boas, sequins and of course, outrageous shoes as teams with names such as Sole Sisters, Jolly Jigglers, The Breast Pumps and Paws for Ta Tas glammed it up and strutted their stuff, Fantasy Fest style, before a panel of celebrity judges. The competition was fierce, as were the outfits; some teams attempted to get an unfair advantage by giving gifts to the judges. The Jolly Jigglers, which included four, well, hunks, literally dropped their drawers for the cause – revealing pink briefs. (The team, led by Lisa Pirro, went on to win the coveted Ms. Fabulosity award).

“It was a sassy and magical afternoon — the most outrageous and incredible event we have had yet,” says Tammy Gail, founder of Glam-A-THON. “I am humbled by how much time went into the preparations for each team and how much the teams actually raised. And the fact that the funds we’ve raised will help our neighbors who are battling breast cancer is the most rewarding part of the entire experience.”

For a complete gallery of images from Saturday’s Glam-A-THON, click here 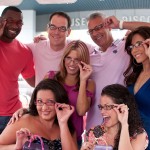 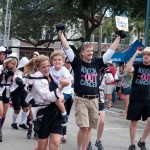 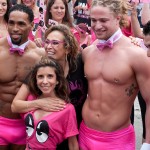 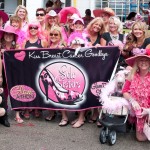 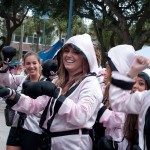 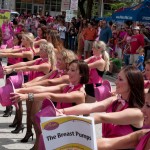 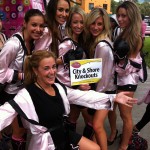 The City & Shore “Knockout” team at work at Glam-A-THON on Saturday in downtown Fort Lauderdale. 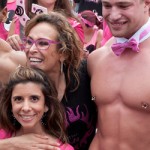