Called the Andy Warhol of Miami, pop artist Martin Kreloff helped set the stage in the 1970s for the city’s emergence as a global art destination in the Art Basel era. In both his 1976 solo show debut, “MIAMI SAYS ART,” and 1978’s “MIAMI WORKS,” Kreloff’s canvases captured a colorful swatch of the city’s populace, from the mayor to a lifeguard to a Burger King cashier. His influence is on display in “Martin Kreloff: A Retrospective” through March 31 at the Jewish Museum of Florida-FIU. jmof.fiu.edu.

Lead art caption: The Lifeguard, 1978, acrylic on canvas, courtesy of the Jewish Museum of Florida-FIU. 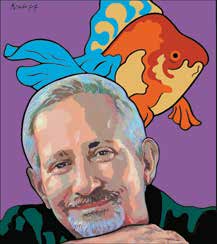 Self-portrait, 2006, acrylic on canvas, courtesy of the Jewish Museum of Florida-FIU.